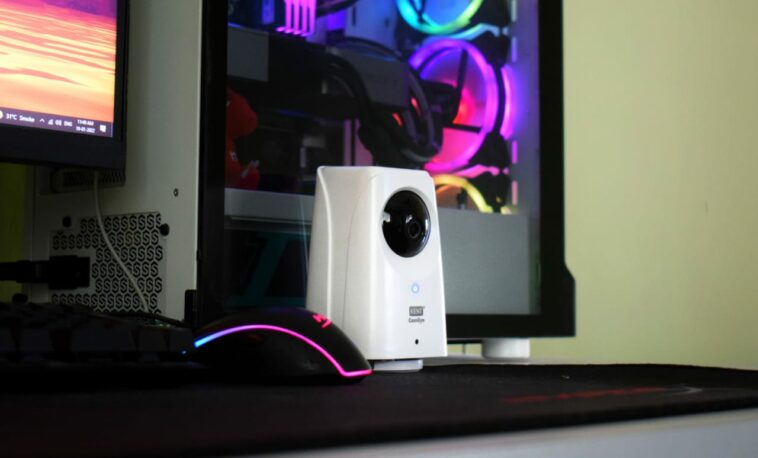 Smart consumer electronics products are rapidly growing across the globe and ever since smartphone brands have begun venturing into other spaces, the competition has grown stiffer. It is not only the audio devices, but the company has catalogued a plethora of smart products such as smart TVs, smart bulbs, and even CCTV cameras. In this article, we are reviewing one of such useful smart devices which have become a requirement for modern day’s lifestyle. We are talking about 360-degree CCTV security cameras.

In the market, the Kent CameEye HomeCam 360 is competing against the Xiaomi Mi Home security camera and the Realme 360-degree security camera. How well is the Kent offering fair against the competition and is it suited for your daily usage? We have broken down all the aspects of whether you should go for it or skip it. Take a look:

The design seems to be quite different from the traditional dome shaped CCTVs cameras. It has more of a rectangle form factor with a black spherical “head” that houses a 1080p camera with a 65-degree field of view along with infrared light beads for night vision.

The spherical has a motorized pan-and-tilt capability that you control from the Kent CamEye companion app, and it rotates 65 degrees vertically and the base rotates 360 degrees horizontally offering a Panoramic view.

Underneath, there is a reset button along with a microSD card slot that supports up to 128GB of storage for recording footage locally. On the base are a micro-USB power port and no battery-power option.

Security camera setups rarely go as smoothly as their “quick start” guides promise, but the HomeCam 360 is an exception. The KENT CamEyee companion app immediately found my Wi-Fi network, and with the help of some voice prompts on the HomeCam 360. I got the HomeCam 360 connected and running within a couple of minutes. It’s worth noting, however, that the HomeeCam 360 Camera can only connect to a 2.4GHz network.

Controlling the HomeCam 360 with Kent CamEye app is a treat as well. Upon opening it, you’re taken to a device’s screen where all your connected cameras are displayed. From here you can share a camera with family members, see all activity alerts associated with it, and access that camera’s settings. You can control the pan-and-tilt manually or via automated methods. Tapping the camera image opens the HomeCam 360’s live stream. The app displays the usual camera controls, including Listen and Speak button and ones for taking a photo. The bottom half of the screen is occupied by the HomeCam’s pan-and-tilt controls with which you can manually direct the camera. Alternately, you can tour panoramic scenes at the push of a button.

The 2-megapixel CMOS sensor can capture nice daylight video at max 1080p. The exposure and colour were good, faces were clearly recognizable, and motion blur was minimal, though details tend to be pixelated and blurred. The HomeCam 360 uses six infrared LEDs to illuminate a dark room; night-vision videos were acceptable (both with and without motion tracking). Details were a bit blurred, but faces were recognizable.

The HomeCam 360’s motion-detection functions to the extent that the app will always send an alert and record a video when the camera detects a person or an object depends on the configuration. The device can track a movement and move on its own along with the activity. For example, if you are moving from left to right, the camera will also move from left to right as it detects movement. We discovered this feature to be a hit and miss. It occasionally didn’t determine my activity and it can’t move fast enough to detect fast actions. If somebody ran in front of the camera, it will stop moving after rotating just a tiny bit because of the inaccuracy. But it was nice to have the feature.

The HomeCam 360 has support for a MicroSD card in which you can record the footage with H.265 Video Encoding. The max capacity of the MicroSD Card it can support is 128GB. The memory card needs to be purchased separately as it is not supplied with the camera.

This HomeCam 360 also has a 2-way calling feature with the use of which you can talk to your family members if you are outside the house. The KENT CamEye HomeCam also comes equipped with an in-built speaker and a mic. This means that you can speak through your smartphone and the camera will output your voice through the speaker like a normal call. The other individual can also talk to you and you will hear him/her through your phone’s speaker.

To close, we think that the KENT CamEye HomeCam 360 is a reasonable investment if you are looking for a smart CCTV camera to cover most of the space in a smaller room. It saves you the cost as a single camera can cover multiple angles and areas using the KENT CamEye Camera 1080p’s 360-degree rotation panning. The app is feature-rich offers tons of features including 2-way calling, event-based cloud recording and Motion Tracking.